A Yellow-legged Gull Larus michahellis is being present since the end of september on Øygarden, but only the last few days it is being seen regularly at Hatlestad, near Tjeldstø on Øygarden. Couldn't visit last weekend, so I went monday morning. I found it first flying at Straumsundet, but half an hour later I found it back sitting together with two Herring Gulls on a rock at quite a distance, much to the relief of those who were searching; a huge crowd of four other birders(!) managed to see it there after being warned...The bird flew away after some ten minutes.
There is some discussion about the ID (good p5, but not enough black on the outer primaries...). I am not a gull-guru, but I think that it looks like a very good candidate for michahellis. We'll see how the rarity committee decides...it would be a new bird for me on my Norwegian list.
On Herdlevær the female Red-baked Shrike was still present, together with a calling Yellow-browed Warbler, some flyby Parrot Crossbills, Common Redpolls and the usual Tree Sparrows. 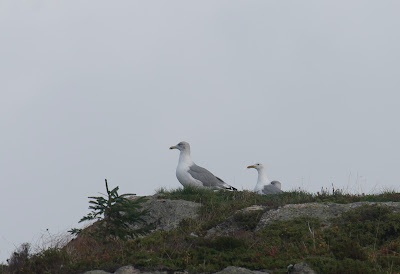 Not the best picture: record shot of the Yellow-legged Gull (bird on the right).
Large bill with red gonydeal angle-spot and completely white head visible here.
It also has a red orbital ring, visible only when clicking on the picture... 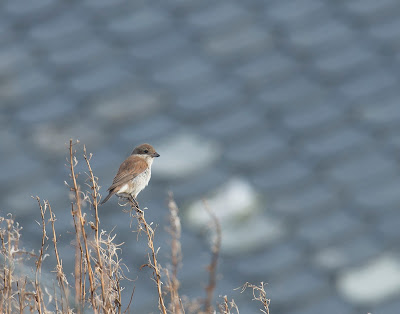 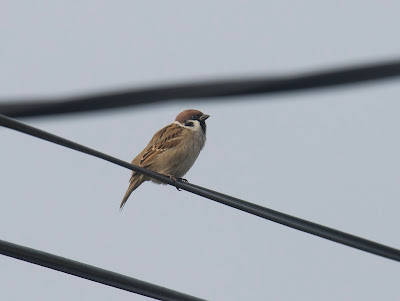 one of the noisy Tree Sparrows

on October 17, 2017
Email ThisBlogThis!Share to TwitterShare to FacebookShare to Pinterest