Around 12:00 today Eirik Adolfsen reported a probable Honeybuzzard over Fyllingsdalen, flying south to Bergensdalen. That is where I live and I was at home. Of course I went up to the balcony and, believe it or not, there it was flying over my head, 10 minutes after the report. All went very quick, but it was a Honeybuzzard indeed, and a dark-colored one!!!

At first I could see it around 10 seconds in my bins gliding to the south and turning once, spreading its tail. Then I tried to photograph it, but it flew too quick. After that I found it back, I could see the bird gliding and flying for about one minute through my telescope, but against strong sunlight. All in all I could see enough details (characteristic silhouette, quite long tail, head and wings and an extra band on the tail when still in good light, as well as the flight silhouette with downcurved wings and flying like a kite) to make a positive ID. Now I have to convince the local committee also. But what an experience!

Made a description after the event. The detail drawing of the tail shows more contrast than the bird actually had, but the idea is to show the bird had a band on the tail and not many small stripes as Buzzard would show).  Sorry for the bad quality.. 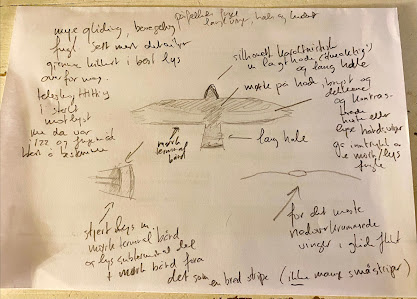 In the morning I made a walk with Hickman at the biological station. Quiet there, but a migrating Greenshank was nice.

on August 28, 2021
Email ThisBlogThis!Share to TwitterShare to FacebookShare to Pinterest