There are a lot of redpolls around these days, most of them flyby's though. Difficult stuff as they are more or less are lookalikes. One needs to see them quite good to put a name on it. Different species or subspecies are involved; the locally breeding (south-west norwegian) Lesser Redpolls (brown), Mealy Redpolls (grey) from the north and Coues' Arctic Redpolls (white) from further north. These three species are reported widely the last few weeks.
The ringing station on Herdla is ringing them and there is a possibility to study the birds in the hand. That makes identification a bit easier. Last sunday I happened to be on Herdla and paid Nigel and Sissel Goodgame a visit as they were ringing. I was lucky to see some birds in the hand with at least one Coues' Arctic Redpoll (exilipes) and a candidate Greenland Mealy Redpoll (rostrata) 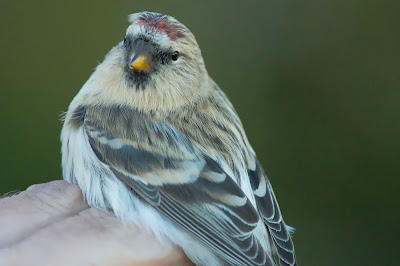 First year Coues' Arctic Redpoll, note buffy wash on the face and broad white rump. In fact, the buff wash on the head is one of the best features to distinguish it from other redpoll-species 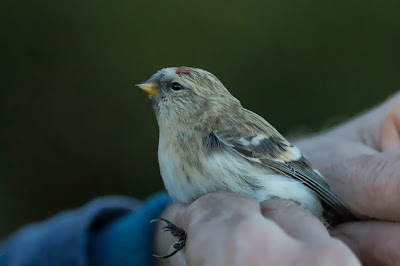 and tiny bill with straight culmen 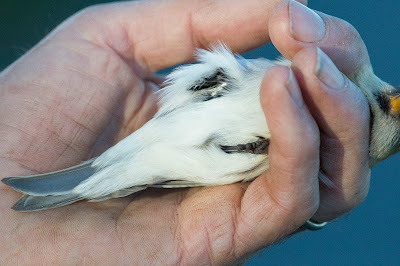 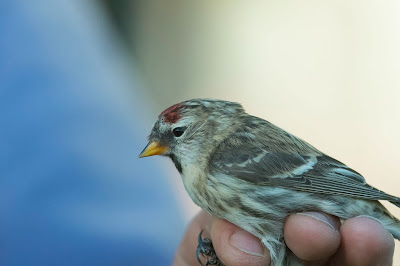 on October 15, 2013
Email ThisBlogThis!Share to TwitterShare to FacebookShare to Pinterest