Early morning birding at Herdlevær in beautiful autumn weather. It resulted in finding a Red-breasted Flycatcher. At first it showed well for about half a minute, but it was elusive after a Peregrine Falcon had flown over. It was rather vocal, but not constantly calling. Typical dry rattle: "trrrrr",  recalling a soft Wren. This call is different from the call of Taiga Flycatcher, which is even more dry and harder. I didn't see the bird well enough to see any plumage differences with the latter.
Alas, no sound recording and no pics either, because it was too elusive after I identified it. Both Egil Franzen and Bjørnard Skjold, who were birding in the vicinity, didn't see the bird.
Did get a sound recording of a Yellow-browed Warbler which was present as well. Further a flyby Grey Wagtail, a group of 22 Pink-footed Geese, a Common Chiffchaff, several Blue Tits, a Blackcap, a Garden Warbler and a Yellowhammer...


Yellow-browed Warbler:
http://www.xeno-canto.org/197970
on October 06, 2014
Email ThisBlogThis!Share to TwitterShare to FacebookShare to Pinterest 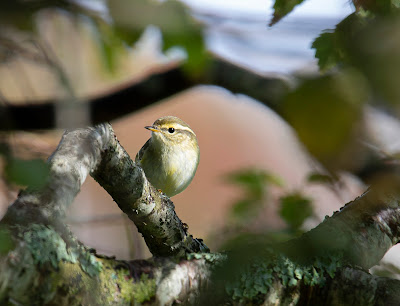