We were a week on Utsira. The first week of october normally is the best period for autumn migration.  It was a fine week indeed, but no cosmic finds. Best bird was a Radde's Warbler, with a Western Bonelli' coming second. This Bonelli's was discovered in the field, then caught and after that rediscovered in the field (by me and another birder). Further highlight include three or four Olive-backed Pipits, one of which I found myself. The picture of this one is bad (hard wind), but I wonder if it had a ring on it (they ringed one the day before and the day after...).

The weather wasn't cooperative with gales and rain, but it was nice birding most of the time with minor finds some Common Rosefinch, Richard's Pipits, Yellow-browed Warblers, Great Grey Shrikes, Common Stonechat and plenty of common species like Common Redstart, Blackcap, Lesser Whitethroate, Robin and so on.
On the way back succesfully twitched a Tawny Pipit at Taravika on Karmøy.


on October 10, 2011
Email ThisBlogThis!Share to TwitterShare to FacebookShare to Pinterest 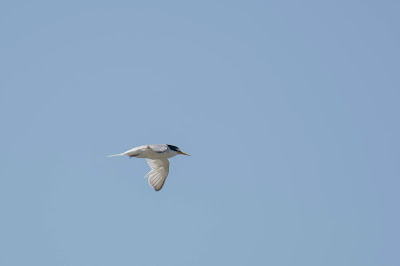